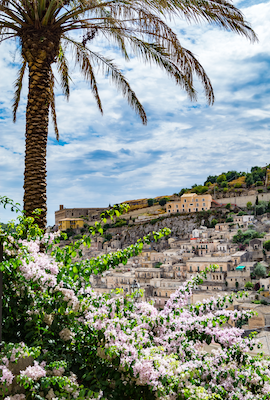 Ragusa is an Italian municipality of 73.439 inhabitants, capital of the Libero Consorzio Comunale di Ragusa in Sicily that replaced the suppressed Province of Ragusa. It is the seventh largest municipality in the region by population and the third largest by area. The municipal house stands at 502 m above sea level.

It is the southernmost capital of Italy. It is called the “city of bridges”, due to the presence of three very picturesque and historically valuable structures, but it has also been referred to by writers, artists and economists as “the island within the island” or “the other Sicily”, due to its history and socio-economic context that is very different from the rest of the island.

In 1693, a devastating earthquake caused the almost total destruction of the entire city, claiming more than five thousand victims. Reconstruction, which took place in the 18th century, divided it into two large districts: on the one hand Ragusa Superior, located on the plateau, and on the other Ragusa Ibla, built from the ruins of the ancient city and rebuilt according to the ancient medieval layout.

The architectural masterpieces built after the earthquake, together with all those in the Val di Noto, were declared a UNESCO World Heritage Site in 2002.

It represents the landscape centre of “Commissario Montalbano”, as well as being the town for which Leonardo Sciascia loved to emphasise the genuineness and sincerity of the human relationships of its inhabitants. These attributes succeeded in disassociating it from the Mafia to such an extent that it led the writer to refer to it as the “Provincia Babba”.

The city divided in two

The city is divided into two areas: Ragusa Ibla (the old part) and Upper Ragusa (the part built after the 1693 earthquake). Among the most important monuments in this area are the Cathedral of San Giovanni and the Church of the Collegio di Maria Addolorata. In Ragusa Ibla we mention instead: the Church of Santa Maria delle Scale, the Church of Santa Maria dell’Itria, the Cathedral of San Giorgio and the Portal of San Giorgio. Then there are the famous Giardini Pubblici (Public Gardens), rich in plants typical of the area, inside which there is also a terrace that overlooks the valley that surrounds the historical centre and from which there is a splendid view of the Iblei Mountains.

Among the noble palaces is Palazzo Arezzo Trifiletti, which was destroyed during the 1693 earthquake and rebuilt only in the mid-19th century. Both the courtyard and the entrance hall are dominated by ‘pitch’ stone, the asphaltic stone that makes up the fine portal surmounted by the family coat of arms. A magnificent scissor staircase leads to the first floor of the historical residence. Inside, one can admire beautiful paintings (especially portraits of the Trefiletti ancestors), sumptuous floors and ceilings (such as the Salone delle Feste). There is a wonderful view of Piazza Duomo with the magnificent Cathedral of San Giorgio in the background. The lounges and period furniture are distinguished by their characteristics, for example the dining room is known as the “angels’ room”, while the yellow drawing room is paved with pitchstone and embellished with ceramic tiles of the Neapolitan school.