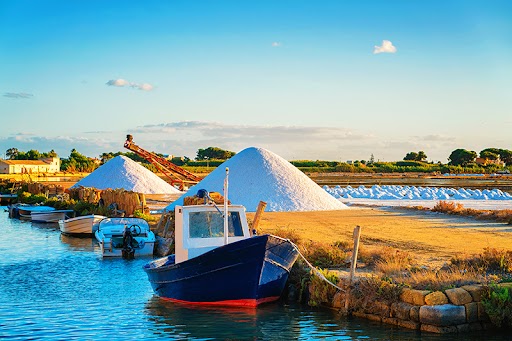 Marsala is a Sicilian city of about 91,000 inhabitants that is part of the free consortium of Trapani. Famous for many reasons, among the best known is the DOC wine from 1969, the first ever in Sicily, and the site of Garibaldi’s landing of the Thousand.

The origins are truly ancient. We start in 397 B.C. when the colony of Mozia was totally razed to the ground by Dionysius I of Syracuse and the survivors fled to the coast to found Lylibeo (the city overlooking Libya). This settlement was not so lucky, as it was sacked, ravaged in alternating phases: while the Romans traded it for the seat of praetor and quaestor, the Vandals destroyed it. When the Arabs re-established traffic, the city began to flourish again and was renamed Marsa Ali and then Marsa Allah (from which it derives its present name).

At that time, urban planning regained vigour and both because of this and the perfect location for trade, other dominations followed from the end of the 11th century: Norman, Swabian, Angevin and finally Aragonese. The latter fortunately brought the city back to life, allowing it new development and prosperity due to the presence of the port and agriculture.

The silting up of the great port of Punta d’Alga decreed in 1575 by Emperor Charles V to stop Saracen incursions marked the end of it.

The Englishman John Woodhouse (who first produced Marsala wine) changed the city’s fortunes when he arrived in the 18th century and decided to try to stabilise it for export. He successfully experimented with adding good alcohol to the wine and began exporting it. For this it was necessary to build a new port, with its own funds: thus Margitello was born.

Today, if you go to Marsala, you will be spoilt for choice among the things to see.

These include the island of Mozia, the Florio wine cellars, the Ettore infersa salt pans, two reserves (the Zingaro and Monte Cofano ones), the Stagnone salt pans, the historic centre and the fish market.