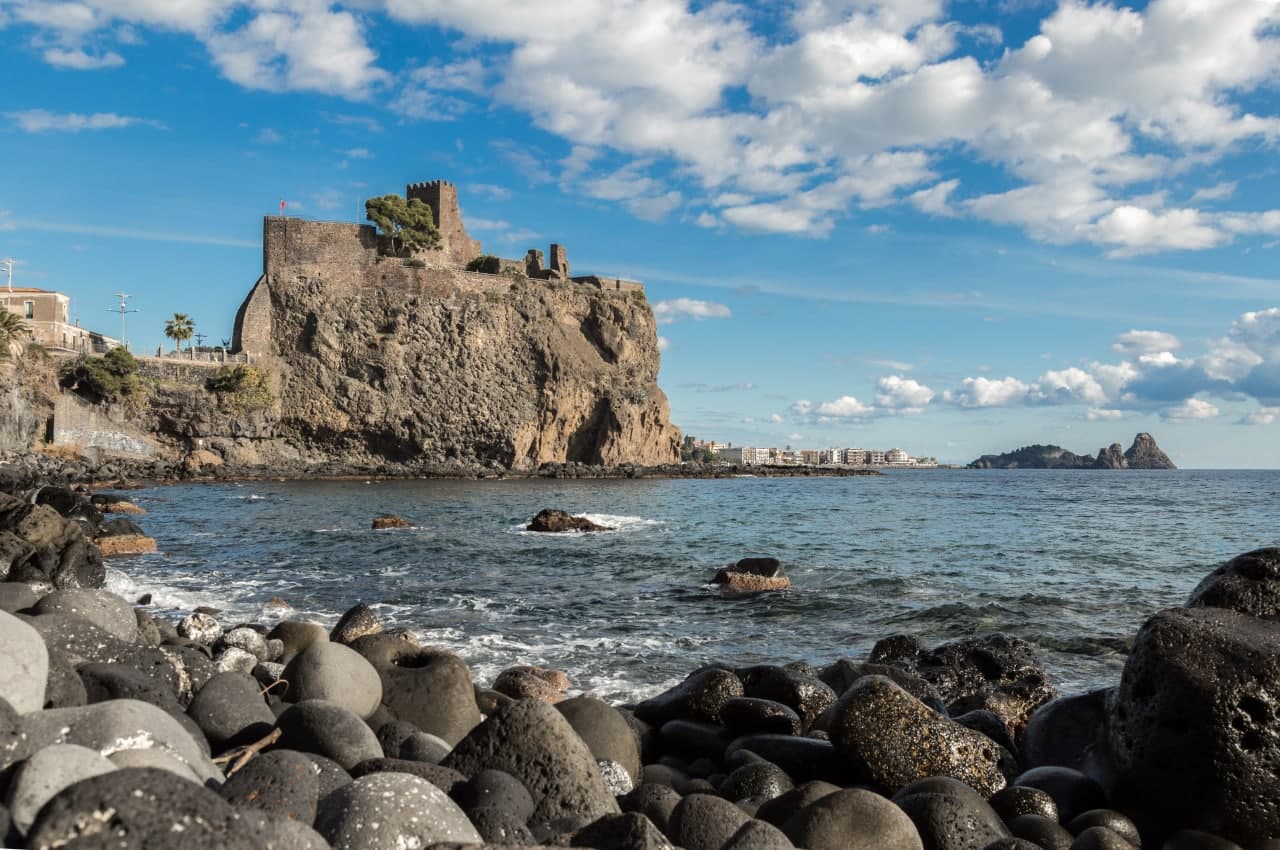 Aci Castello is a small municipality about 9 km from the city of Catania.

The fortress on which Aci Castello stands was certainly frequented, thanks to its strategic position, during both Greek and Roman colonisation. Certainly, the archaeological finds that suggest this are mostly underwater, and today they are preserved in the showcases of the Museo Civico.

Aci Castello is the first centre of the Riviera dei Ciclopi, the area where gigantic rocks emerge from the sea. According to legend, the giant Polyphemus threw them at Ulysses, who had just blinded him. It is, in fact, a small seaside resort built all around a Norman castle of the Middle Ages, on lava bases.

In the second half of 1169, a tremendous lava flow destroyed the town; in 1693, for the second time, Aci castello was completely razed to the ground by a volcanic eruption and rebuilt in 1718.

Wooden platforms, assembled and disassembled during the summer season, allow one to enjoy the sea and the beautiful seabed of the place, including snorkelling and diving.

The place is so suggestive that it became famous, even abroad, thanks to Giovanni Verga, who used its coastline to set “I Malavoglia” in 1881 (specifically in the area of the hamlet of Aci Trezza). The large basalt stacks that characterise this stretch reach up to 70 metres in height and form part of a protected area known as the ‘Litorale dei Ciclopi’.

In 1948, Luchino Visconti shot “La terra trema” (The Earth Trembles) in these places, a film that retraces the story of Verga’s Malavoglia with an almost documentary-like precision. In fact, the protagonists are local inhabitants who, in a very tight Sicilian style, were able to fully represent Italian neo-realism.

The local cuisine, like Sicilian cuisine in general, is steeped in influences deriving from the various dominations that have succeeded one another on these lands. We speak as always of Arabs, Normans, Spanish and French. One thing is certain: fish is the main dish here: in fact, fishing is one of the most important activities here. We therefore recommend eating in the small restaurants in the village that serve fish, to enjoy a perfect Sicilian-style food and wine experience.